The Power of the Roar

Recordings from this Powerful event are available on a USB Flash Drive: 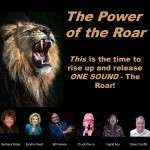 THIS is the time to rise up and release ONE SOUND –

The Lord is roaring from Zion…and the heavens and the earth tremble (Joel 3:16)

The Lion of Judah is coming forth as a man of war! He is raising a war cry, and declaring that He shall prevail against His enemies (Isa 42:13). He is restoring a roar within His people to defeat the enemy. When God roars the enemy is destroyed.
This is not a time to remain passive. Matthew 11:12 says that the kingdom of heaven suffers violence, and the violent men take it by force. This is a time for a violent roar to be released into the atmosphere that will establish our Kingdom authority. Prov 28:1 declares that the “righteous are bold as a lion.” Receive a fresh boldness that will empower you to roar over your circumstances and eradicate all fear, intimidation, and hopelessness. It’s time to arise and worship the King of King and the Lord of Lords while releasing one sound- THE ROAR!

Barbara J. Yoder is the overseeing apostle and founder of Shekinah Regional Apostolic Center, a racially and culturally diverse church in Ann Arbor, Michigan. Barbara leads Breakthrough Apostolic Ministries Network (BAMN) a network of pastors, ministry leaders and marketplace leaders. She travels extensively as a national and international speaker, ministering at various conferences and churches. She is the author of 5 books, has contributed to the Women of Destiny Bible and has been featured on the cover of Charisma magazine as one of the most influential women leaders in the church today. Barbara has a passion to see the apostolic centers restored (Acts 15:16-17) which will cause a harvest to erupt in cities, regions, and nations, and will enable the Kingdom of God to manifest in every sector of society. She is known for her cutting edge apostolic breakthrough anointing infused with prophetic revelation.

Charles D. “Chuck” Pierce serves as President of Global Spheres, Inc. (GSI) in Corinth, Texas. This is an apostolic, prophetic ministry that is being used to gather and mobilize the worshipping Triumphant Reserve throughout the world. GSI facilitates other ministries as well, and participates in regional and national gatherings to develop new Kingdom paradigms. Chuck also serves as President of Glory of Zion International Ministries, a ministry that aligns Jew and Gentile. He is known for his accurate prophetic gifting which helps direct nations, cities, churches and individuals in understanding the times and seasons in which we live. Chuck has a degree in Business from Texas A&M, Master’s work in Cognitive Systems from the University of North Texas, and a D. Min. from the Wagner Leadership Institute.

Sandie Freed is the Co-Senior Pastor of Lifegate Church International, which is a racially and culturally diverse ministry in Hurst, Texas. She is the founder and director of Lifegate Leadership Institute where saints (in active ministry and also the marketplace) are trained and equipped to be effective ministers for the Kingdom of God. She has also pioneered the School of the Prophetic Ministry since 1988 in the Texas region. Sandie is a prolific author of over fourteen books and various articles for magazines such as Charisma and The Voice. She has been on numerous radio programs as well as television interviews such as James Robison’s Life Today and Celebration (Daystar) with Joni and Marcus Lamb, known for her passion for being a “Freedom Fighter”.

Dr. Bill Hamon is the founder of Christian International Ministries, a premier prophetic ministry for over 45 years. A prophet for 60 years, he has prophesied to more than 50,000 people and provided training for over 250,000 in prophetic ministry. He has authored seven major books, specializing in the restoration of the Church and what to expect next on God’s agenda. Dr. Bill Hamon is respected by church leaders around the world as a senior leader of the prophetic/apostolic company God is raising up in these last days. He serves as bishop to over 3,000 ministers and churches and CI’s headquarters on five continents. Bill resides in Santa Rosa Beach, Florida, along with his three children, eleven grandchildren, and sixteen great-grandchildren. “Mom” Hamon’s legacy lives on through their family and the work that continues at Christian International Ministries.

Ingrid Rex is gifted to bring people into the awareness of God’s presence through worship and the Song of the Lord. She loves to exhort the Body of Christ with prophetic words and prophecy and to activate the prophetic gifts in others. A South African by birth, she came from the same church in Durban as Kim Clement, who she worked with for 9 years when first coming to the USA in 1995. She has been privileged to minister with a number of prophetic ministries and has worked on worship teams in events and crusades both in the US and Internationally with Kim Clement, Benny Hinn, Rick Godwin, Rodney Howard-Browne, Graham Cooke, Joseph Garlington, Mark Chironna, Sigi Oblander, and the late Reinhardt Bonnke. Ingrid is passionate to see the glory of the Lord touching and transforming both young and old through encounters with a living God in worship.

Dave Cranfill is the founder and president of Kingdom Flame TV, a Christian Internet station broadcasting 24×7 since 2013. He specializes in producing TV programs, live broadcasts and online courses for use on Kingdom Flame TV and other channels, on social media, or in online schools. As a producer, Dave has close to 1000 live broadcast credits, dozens of online events, and over 500 digital products. Dave has served as an engineer and senior management for two fortune 500 companies, and was a founder in a technology start-up that brought numerous products to market. As an Inventor involved in developing the first smart phones, Dave holds 14 United States patents for his work in smart phones and touch screen technology. Dave’s passion is to use media and technology to reach the world with the gospel of Jesus Christ, and offers unique insight to equip believers to have a powerful Impact for the Kingdom, whether in traditional ministry environments or in the secular workplace.